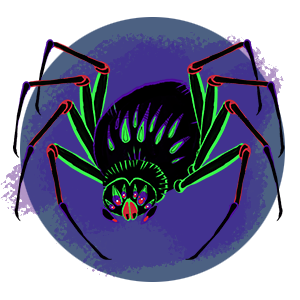 Bound is Stellar Door’s first film project, created as an entry for Frederick’s 72 Film Fest, a contest that asks teams of all experience levels to produce a roughly 6-minute film in just 72 hours.

Based on a prompt provided by the contest, “Fear of Spiders,” we created an imaginative 2D animated film that borrowed from our programmer/animator Adam’s own experiences of facing and overcoming arachnophobia from his time hiking the Appalachian Trail, and spun (no pun intended) a new character and a new tale outward from that core idea.

The film was screened to the public on Oct 12-13, 2018 at Frederick’s Weinberg Center for the Arts.  We are proud to have won the Best Amateur Film award, as well as receiving three additional nominations for Best of the Fest (Best Overall), Best Lighting, and Best Cinematography.

This project was an excellent chance for our team to explore and gain experience using Unity‘s new animation system, which we hope to incorporate heavily into our current and future game development projects.  But, as we discovered, making a film was a heavily creatively rewarding project in its own terms, and something we intend to take on again before long.

All illustrations, animation, musical composition, audio, and editing were completed in 72 hours.